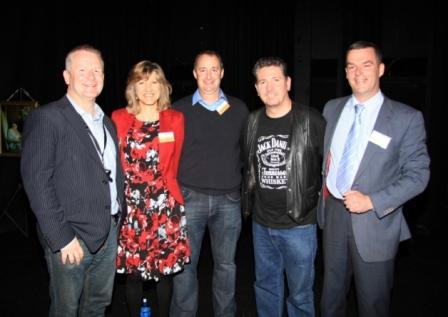 A representative from each service in Exchange House also attended to support the play. The play was written and performed by acclaimed actor and member of the Traveller community Michael Collins. The one man performance was hosted at the Backstage Theatre in Farneyhoogan Longford.

The story of the play was based on the father of a young man that had taken his own life by suicide and how he was trying to come to terms with his death. Michael Collins hopes that through his delivery of the play people will be made aware of the high level of suicides and how it can affect the family or community with the aim of the statistics being reduced as a result of this alongside other mediums. Suicides from the Traveller community are 6 times higher than from the settled community. The performance was attended by over 200 people that came from local community agencies and services, with members of the Travelling community coming from all over the country.

The National Traveller Suicide Awareness Project alongside the Primary Healthcare Project for Travellers in Longford funded the production and did a great job in organising the event that stimulated interesting discussion and awareness about the topic of Suicide within the Travelling community.  After the play there was an open discussion with audience and the guest speakers Paul Nugent – Mental Health Social Worker within Travelling to Wellbeing project, Josephine Rigney - HSE Suicide Prevention Resource Officer and Michael Collins - actor/playwright. The statistic of 6:1 show how many Travellers are affected by suicide compared to those from settled communities. This astounded some of the audience that took part in the discussion. It was remarked upon by a local Psychotherapist how she was not aware of such high figures and that she was going to explore how she may get these figure out into the public domain.

World Suicide Prevention Day was promoted nationwide throughout the month of September. Exchange House also marked this date by having an open day and also launching the NTSAP website with great success. It was remarked by many that the educational impact of getting the message across through the visual arts was very powerful and had a great benefit to an audience that may not be literate and where leaflets and posters cannot reach.

My Community 2020 "Sharing Our Digital Experience" event a success »