Catch Of The Day: Travelling to Wellbeing Project goes fishing 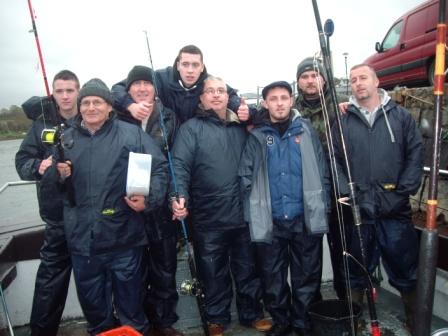 In 2013 a men’s suicide awareness/Fishing project was set up as part of the Travelling to Wellbeing Service which is a partnership project between Exchange House, Dublin, Offaly Traveller Movement and Travellers of West Cork.

This project focuses on engaging Traveller men in specific interventions to initiate dialogue and raise awareness around mental health and suicide. As part of this new initiative Travellers in Offaly were provided with the opportunity to participate in SafeTalk and ASIST training.

Mental Health is something everyone has and it is important that steps are taken to protect it in the same way we guard our physical health. Fishing is a healthy activity and a great recipe for a healthier body and mind. Ten men from Tullamore travelled to Westport in County Mayo to take part in a full day of Deep Sea Fishing. They were accompanied by Sandra McDonagh Mental Health Social Worker Exchange House Dublin but based in Offaly Traveller Movement and Larry Scully, Men’s Health Worker, Offaly Traveller Movement. The aim of this activity was to provide a new life skill while also developing positive and secure relationships within the group.

Before a line was cast the skipper assembled the group and provided each person with safety gear and fishing equipment. Throughout the day as everyone was waiting on the boat deck for a bite there was lots of laughter and excitement. It was energetic and inspiring and by the end of the day everyone was well acquainted. Several hours were spent at sea before returning to land with a great catch of fish.

To continue on from this many of the members of this group along with other members of the Traveller Community in Offaly participated in SafeTalk Training. SafeTalk is a half day training programme that aims to help participants identify and support people with thoughts of suicide and connect them to first aid resources. This type of training is fundamental among our Traveller Community and we aim to engage as many Travellers as possible in Mental Health and Suicide Awareness Training in County Offaly in the coming year.